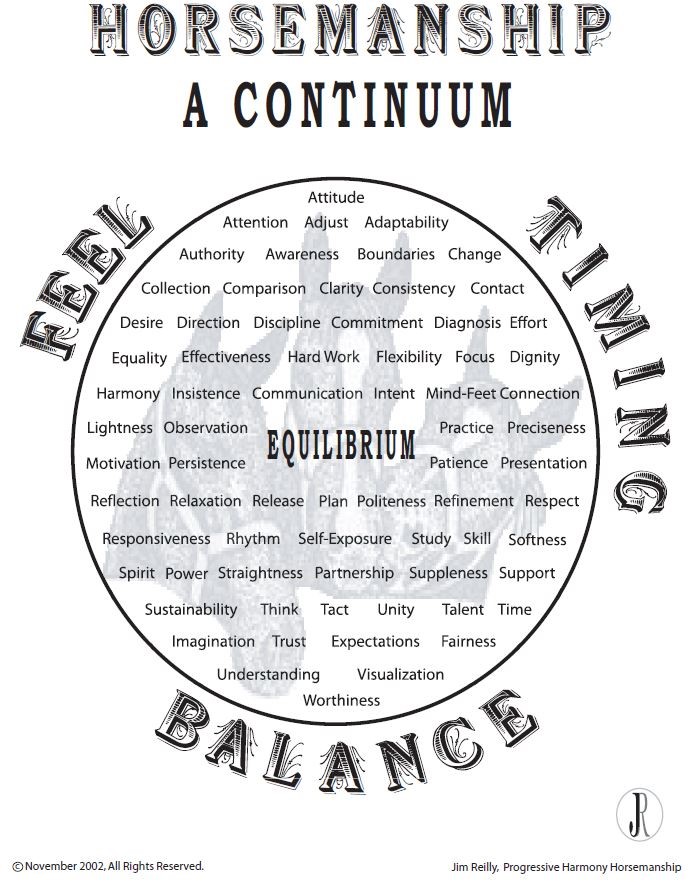 I believe an explanation is in order about the circle of horsemanship schematic which has recently been added to the student section.  If not an explanation, per se, then at least what was going through my mind at the time I developed it and why I chose the words I used (although that will become evident with the definitions provided.)

I am a student of the horse and of horsemanship in general.  I have studied, analyzed, and reflected upon the works of the old masters, e.g. Pluvinel, de la Gueriniere,  William Cavendish (Duke of Newcastle); the masters of more recent times, e.g. Steinbrecht, Baucher, Decarpentry, Seunig; and the writers of modern times, e.g. Belasik, Dr.Reiner Klimke, Nuno Oliveira, George Morris,William Steinkraus, Ray Hunt, Tom Dorrance.  I have viewed and studied over 100 videos encompassing various riding disciplines ranging from dressage to jumping to Doma Vaquera and including colt-starting, reined cow horses, cutting and reining.  I have attended clinics presented by many horsemen representing several disciplines to include, for example, Paul Belasik (dressage), George Morris (show jumping), Ray Hunt (colt-starting) and Mike Bridges (Vaquero style bridle horses).

Through all this study plus my own experiences in schooling and riding horses, I came to the conclusion that there is a certain constancy of words, concepts, and principles that emerges from all this work embracing a philosophy which, if followed and practiced, will lead us on a journey toward being in perfect harmony with the horse (recognizing the possibility that although perfect is probably not attainable, except for those fleeting magic moments, the quest for it is a most worthy and honorable undertaking.)

I decided to attempt to capture the essence of all this in a single document which could be viewed and studied at a simple glance, ergo the circle of horsemanship schematic was created.

HORSEMANSHIP, as singularly defined by me, is anything and everything that has to do with developing a harmonious relationship with, schooling (training), and conditioning the horse through a graduated educational process.  I chose the word CONTINUUM to indicate that horsemanship (like the definition of the word) is a continuous whole with no discernible division into parts.  Thus we cannot separate anything we do with the horse into individual non-connected compartments – everything blends together in some manner or form.

All of the essential elements of the philosophy are contained in a CIRCLE, which, by dictionary definition, is a plane curve ending where it begins and everywhere equidistant from a given fixed point thus forming a connected whole.  The fixed point in the center of the circle I have labeled EQUILIBRIUM which means a condition of equal balance between opposed powers or influences.  Therefore, if we attain this equilibrium (which also can be viewed as a bulls-eye in a target) with our horse we will have reached that harmonious state of balance where the horse responds to our every request with great impulsion matched with great lightness, i.e. the absence of resistances or “braces”.  The French term for this is RASSEMBLER, literally “to gather together” which has a far deeper and more complete meaning than the English term “collection”.  As an aside, it is interesting to note that the word equilibrium appears in the dictionary between equestrian and equine.  Hum!

The words within the circle are all the elements which contribute to the circle being everywhere equidistant from a given point, namely EQUILIBRIUM – the center.  The words surrounding the circle, FEEL –TIMING – BALANCE help contain the words within the circle from “leaking out”.  For if one or more words “escape” the circle then the circle will become warped to some degree and no longer will be a circle but will become some other shape e.g. an oval or an “Irish potato”, thus diminishing the equilibrium.  The more words that escape the more the circle will disintegrate and the more the equilibrium will be lost.  A delicate balancing act indeed, but the struggle is worth the effort – if only for a fleeting moment in time.

So that’s my explanation of the circle of horsemanship and why and how I created it.  It, at least to me, represents a distillation of all the critical elements need to achieve harmony with the horse as presented by all the horses, riders, authors, writers, clinicians, and riding teachers that I have been exposed to thus far in my continuing educational process with the horse.

Perhaps I’ve stimulated something in all of you which will lead each one to develop his or her own unique circle of horsemanship.  I sure hope so!